Akumaa Mama Zimbi known with her actual name as Dr Joyce Akumaa Dongotey-Padi who is a Television and Radio Broadcast Journalist, womens right activists, Blogger, marriage counselor and an actress. Akumaa is known for her fascinating, yet enticing stimulating ways of expressing “Medaase” thank you. Her exceptional ways of wearing her headgear also comes of as a distinct Akumaa brand. 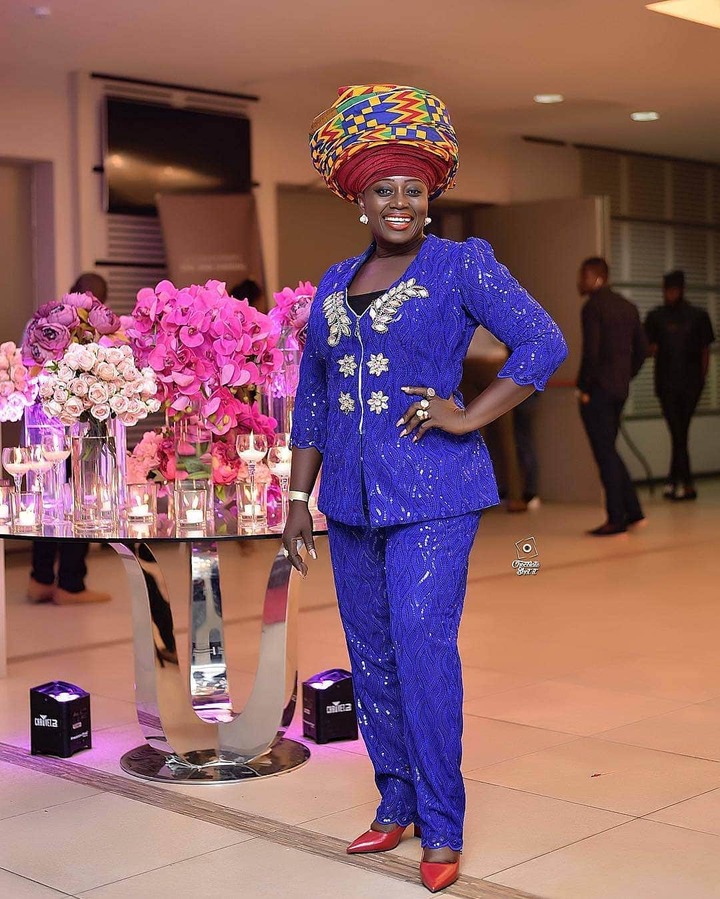 She emerged as a celebrated actress in the early 1990s when she featured on the popular Cantata show as a “house girl” as it was normally shown on Ghana’s First Broadcasting Network, Ghana Television Station (GTV).

Akumaa Dongotey-Padi studied Journalism at the Ghana Institute of Journalism (GIJ) and came out a professional Journalist. Her interest in Broadcast Journalism, precisely in Radio, began in early 2000 as a very close friend of her encouraged her to visit Joy FM, Tema branch to discuss with this popular Radio station as a Radio presenter.

From this brief Biography of Akumaa Dongotey-Padi, you could clearly see that indeed “a journey of a thousand miles, begins with a step”. She is indeed a living legend.

Indeed God has really transformed Akumaa Mama Zimbie, from a Black and White Television as an Award for being a house girl in a TV series to being a TV and Radio presenter and being recognized abroad.

Check out some before and after Photos of Mama Zimbie’s award below;

Sakawa boy allegedly killed his 18-year-old girlfriend after he used the fluid from her pr!vate part for money rituals

Sakawa boy allegedly killed his 18-year-old girlfriend after he used the fluid from her...

Bla Yaw - 28th October 2020
0
A Young Ghanaian guy per reports has killed his 18-year-old after he used the fluid from her private part for money...
Read more

Nana Ntow - 28th October 2020
0
While all bookmakers out there advertise the possibility of winning huge amounts that can turn your life around, not all of them...
Read more

Bla Yaw - 28th October 2020
0
Rapper Joey B is having a good time on the set of Lil Win’s Cocoa TV series in a new video sighted by...
Read more

“The Past is not the present” KNUST’s Sammy set to find new love on...

Bla Yaw - 28th October 2020
0
Do you remember Sammy if KNUST? the guy who went viral after his girlfriend given as Nana Ama broke up with him...
Read more

I Wouldn’t Have Been In Prison Today If I Had Listened To My Mum’s...

Sakawa boy allegedly killed his 18-year-old girlfriend after he used the...