On the 31 of July, 2020, Ghana lost a great Prophet known as, Eric Akwesi Boakye aka Prophet Agradaa. He was reported death early in the morning after not waking up in his sleep. Prophet Agradaa was already suffering from a chronic illness. 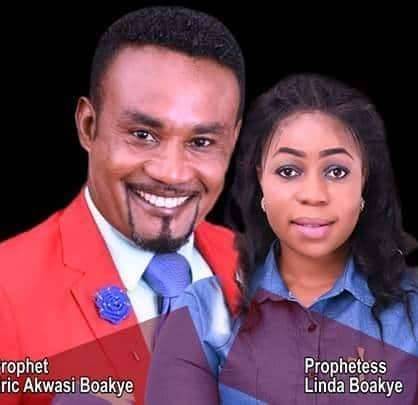 Prophet Agradaa is the leader and founder of the Heavens Door Chapel International who worked with popular Bishop Obinim in his young ages. He was a very influential and powerful Prophet in his ministerial.

His Ministry became a stand still after his illness became very severe. Prophet Akwesi Boakye was having two branches at Santa Maria opposite Blue Kiosk in Accra and Abuakwa-Nsonyameye in Kumasi.

The widow, Linda Boakye who partnered his husband as a Prophetess was also known as Prophetess Agradawaa couldn’t hold her tears at his late spouse one week observation.

His beautiful and handsome three Children showed up at the one week celebration to mourn their late father. Madam Linda Boakye is the photocopy of her children with how they resemble her to the core.

The Agradaa family gave birth two three children, two boys, one girl. A boy as the first born, followed by the girl as the middle born and and the last born as a boy.

Check out some Photos Of the Children of the late Prophet Agradaa;