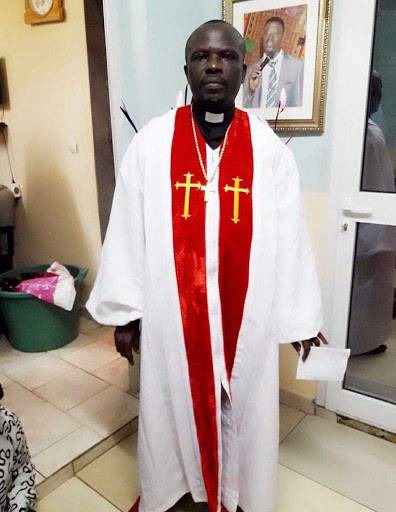 Apreku My Daughter was one of the exceptional, influential and powerful Pastors in the year, 2001-2005 but lost his fame in the wind with personal issues.

Regardless of how he ended up, Emmanuel Kweku Apreku shall always be one of the unprecedented and greatest local Pastors who won many souls into Christianity.

Emmanuel Kweku Apreku aka Apreku My Daughter reminiscing to his glorious days as a Pastor, paved way to one man Churches Pastors with his undisputed miracles and motivational sermons to gain the trust of the masses.

Pastors who were upcoming in his glorious days also tried their possible best to get him up on his feet after he faded away.

With the likes of Prophet Kumchacha, Badu Kobi, Obofour, Salifu Amoako and many more showed up at Apreku’s burial rite to pay their last respect to him.

This Pastors has been the ones who has supported Apreku My Daughter till he finally gave up his Ghost. They didn’t only showed up at the funeral as guests, but impacted some words of inspiration to the Apreku Family and vowed to also support them whiles the breadwinner of the family is no more.

Check out some scenes below;

Bla Yaw - 30th September 2020
0
No doubt about the fact that, nothing can bring members of the two main political parties in Ghana, the ruling, New Patriotic...
Read more

Eno Barony Set Social Media Ablaze With Beautiful Throwback Photos Of When She Was...

“I Think It’s Now Time To Do Away With Corrupt Politician” – Kwaku Bonsam...

Massive Crowd Gathers In Front Of Hello FM Ahead Of Nana...