The Member of Parliament for the Assin Central Constituency popularly known as Hon. Kennedy Ohene Agyapong has been very courageous and outspoken especially in this very year after he started to show up on Net 2 TV The Seat Show. 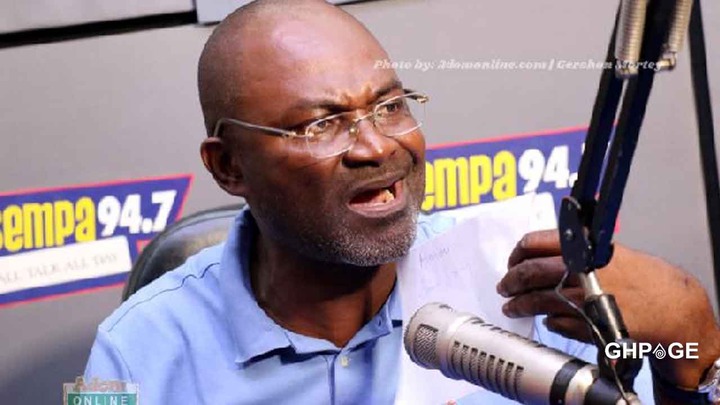 Hon. Kennedy Agyapong has been very nosy on trending issue in Ghana even outside the box of Politics. He has been very much controversial and lively in his personality and has been tagged as one of the influential Politicians in the country.

The current trending story in Ghana now is the Sugar Daddy fiasco between popular Tracey Boakye, Mzbel and Kani Gloria. Which has caused serious controversies among Politicians and celebrities.

Hon. Kennedy Agyapong yesterday descended on Mzbel and Tracey Boakye for tarnishing the image of former President John Dramami Mahama with their controversies.

Kennedy Agyapong as we all know to be quick tempered and no nonsense man dragged Tracey Boakye to the gutters as he blasted her in all angles with a lot of exposures acclaimed by him.

Meanwhile, a popular Prophetess who is based in the USA has reacted to Kennedy Agyapong’s allegations on Tracey Boakye as she sends a warning to the Honourable to seize fire because her instincts tells her what could happen if he continue to be on Tracey Boakye.

According to Prophetess Perpetual Donkor, Tracey Boakye can do something harmful to herself and her baby girl who is being tagged as a daughter of a sugar daddy.

Into conclusion, Perpetual Donkor said, a word to the wise is enough, so she hopes and believe that Kennedy Agyapong will bring this banter to an end and even forgive Tracey Boakye’s hard feelings against him.

Fire to fire! This is what Captain Smart did to Dr.UN after meeting him finally

Fire to fire! This is what Captain Smart did to Dr.UN after meeting him...

Blessed Antwi - 19th September 2020
0
Recently, the story that trended on Twitter for a whole week was about the notorious likely fraudster widely known as Dr. Kwame...
Read more

About 11 teachers sanctioned for taking 1 Cedi and 2 Cedis from BECE candidates...

Bla Yaw - 19th September 2020
0
Some teachers helping in the conduct of this year’s Basic Education Certificate Examination (BECE)  have been sanctioned by the West African Examinations...
Read more

God bless her: This is how the 60-years old woman BECE...

My brand is bigger than any Political party in Ghana –...