Nii Tetteh Otu II, the Paramount Chief of Kpone, yesterday walked out on President Nana Addo Dankwa Akufo-Addo during a sod-cutting ceremony for the construction of a district hospital in Kpone. 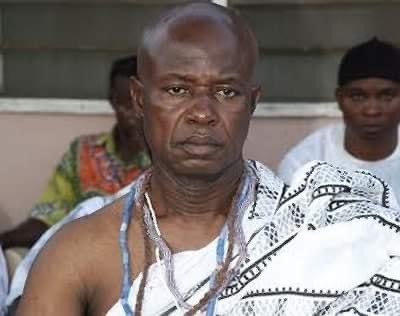 According to various, the chief got pissed off when he saw the building plan which wasn’t up to his expectation. He thought it was a one-storey building.

In a video which went viral on the internet, the Chief was videoed furiously walking out of the Durbar grounds after he insinuated his disappointment was below his expectation.

Leaders and Elders begged him but the pleas all fell on deaf ears, as no one could get him back to the Durbar grounds.

He is an old student of Accra Technical Training Centre (ATTC) as he later furthered his Education at City and Guilds Intermediate Certificate (Radio Servicing) Royal Technical College.

Before his enstoolement as Kpone Mantse, he worked with Nestle Ghana Limited in Accra. He has never hold any political position in life.

His conduct towards the President at the Durbar was uncalled for and unfortunate and must endeavor to apologize.

ALSO READ  C/R: Baby rescued after her mother buried her alive in the Forest.

So sad for NDC : Kofi Adoma Reacts To The Election Prediction Of University Of Ghana

Video: This Is How Soldiers Have Paraded To The Volta Region Ahead Of The Elections

In Just 10 Days To The Election, A Popular Prophet Declare The Winner After...

Blessed Antwi - 26th November 2020
0
The much anticipated 2020 Election will finally be coming in just a few days (10) ahead of us. All Political Parties in...
Read more

So sad for NDC : Kofi Adoma Reacts To The Election Prediction Of University...

Video: This Is How Soldiers Have Paraded To The Volta Region Ahead Of The...

Blessed Antwi - 26th November 2020
0
The Volta Region of Ghana has been a Hotspot for the Military if any electoral exercise is in progress due to some...
Read more

In Just 10 Days To The Election, A Popular Prophet Declare...