Last week on the 20th of October, A beautiful gymnastic lady identified as Esther Owusu-Ansah died in a fatal accident on the Cape Coast to Accra highway.

She was returning from a friend’s funeral when the incident occurred not knowing she had a very tight relationship with Actress Benedicta Gafah.

She was one of Benedicta Gafah’s tight pal’s whom have been classified as siblings due to their tight and healthy relationship and most especially their resemblance.

Meanwhile, the one week celebration of the late Esther has set off at Jukwa-Watreso off the Kakum National Park Road. 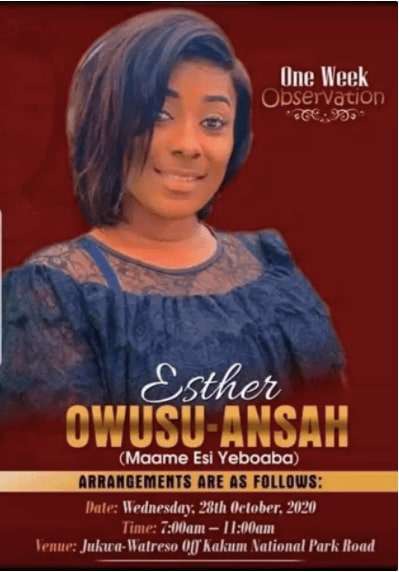 It’s really sad at the grounds with how mourners are paying their tribute to the fitness enthusiast. It’s really sad to lose such a gifted beautiful young woman.

ALSO READ  Benedicta Gafah Excites Fans With ‘No Bra’ Video After Becoming Troll Topic For Editing Her Photo Too Much Just To Look Sexy - Watch!

We encourage the family, friends and sympathizers to take heart and because God knows best, he that giveth, taketh so they must be poised and inspire themselves even though it’s not easy at the moment but hopefully God will console them.

May Her soul rest in perfect peace!

“You Dey Craze”: Broke Ayigbe Edem jabs a fan who asked him for Momo to buy ‘Koko’

Bla Yaw - 19th November 2020
0
In as much as you hate Nana Addo Dankwa Akufo Addo for a reason best known to yourself, I believe you wouldn’t...
Read more

Bla Yaw - 19th November 2020
0
We are less than three weeks into elections and every political party is trying to intensify their campaign and adopt diverse means...
Read more

“You Dey Craze”: Broke Ayigbe Edem jabs a fan who asked him for Momo...

Blessed Antwi - 19th November 2020
0
Edem savagely Trolls a fan with his popular Song “U dey Craze” and told him to go EL after the fan claim...
Read more

Blessed Antwi - 19th November 2020
0
Popular Ghanaian artist, Adina Thembi has revealed that there is no way she is going to live on her own or boyfriend’s...
Read more

Nana Addo Will Win The Elections But.. – Prophet Kwaku Poku...

After A Week Of His Death, A Rare Photo Of JJ...