Recently, the Police in Walewale reportedly busted and arrested a notorious suspected Armed Robbers who went on a broad daylight robbery operation on the Temale to Bolgatanga highway stretch.

This brave recalcitrant gang members yesterday mounted a roadblock on the highway between Wulugu and Karimenga as they threatened and robbed several passengers in their various vehicles with fear of warning shots.

This deviant Armed Robbers escaped by motorbikes by using a bush way after they heard a Police Siren by with the help of the Ghana Police Service tactical experience, the three of them were all arrested few hours whiles they were on theirs motorbikes. 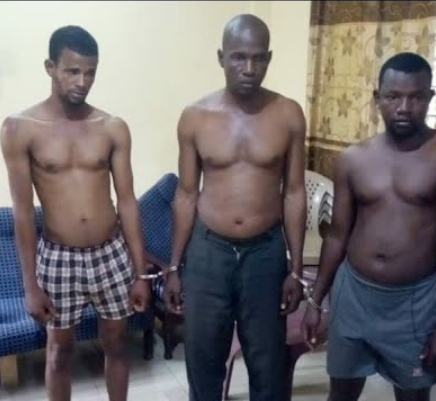 This is the identity of the Three Arrested men

ALSO READ  The cause of Apreku My Daughter's death revealed

After the Police Investigation kicked to proceed, a manufactured firearm and BB cartridges were claimed from the suspected Robbers home.

These Robbers appeared before Court yesterday and was remanded again as further investigation is in progress.

After A Week Of His Death, A Rare Photo Of JJ Rawlings As An Achimota Student Has Surfaced Online

“You Dey Craze”: Broke Ayigbe Edem jabs a fan who asked him for Momo...

Blessed Antwi - 19th November 2020
0
Edem savagely Trolls a fan with his popular Song “U dey Craze” and told him to go EL after the fan claim...
Read more

Blessed Antwi - 19th November 2020
0
Popular Ghanaian artist, Adina Thembi has revealed that there is no way she is going to live on her own or boyfriend’s...
Read more

Blessed Antwi - 19th November 2020
0
We now know why Bulldog is always on the neck of Akufo Addo. Chastising and bastardising Nana’s achievements is something the artiste...
Read more

I will send you to court for impregnating my daughter – Funny Face baby...

Blessed Antwi - 18th November 2020
0
Ghanaian UK-based musician and father of Funny Face's 'baby mama', Jah Wizdom, has revealed that he has not met the comedian before...
Read more

After A Week Of His Death, A Rare Photo Of JJ...

I will stay with my mother till I get married –...