The core founder and leader of the Prophetic Hills Chapel, Prophet Nigel Gaisie has just dropped another shocking revelation concerning the 2020 United States of America’s Presidential election that was held on the 3rd day of November,2020.

The recent revelation made by Prophet Nigel Gaisie is obviously in favour of the former vice president of the United States of America,Mr Joe Biden. He revealed that president Donald John Trump will lose the 2020 presidential elections but he will come back again in 2024 and this recent prophecy of his is causing serious stir online.

Here is what he had to say:

“Donald Trump will lose but come back again in 2024, For no prophecy was ever produced by the will of man,but men spoke from God as they were carried along by the holy spirit(2Peter1:21).” 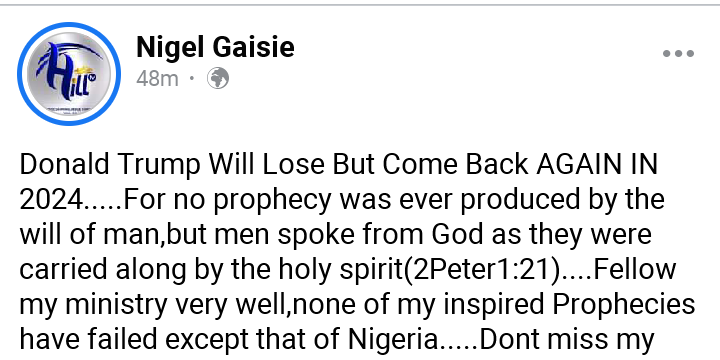 Prophet Nigel Gaisie advised Ghanaians to follow his prophecy very well that none of his inspired prophecies has ever failed except the prophecy he made about the Republic of Nigeria.

Rev. Obofour Runs Away From A Lap Dance From His Wife, Bofowaa In Public (Video)

Bla Yaw - 30th November 2020
0
The 2020 general elections is fast approaching as we have just a week to the poll and as such, party leaders and...
Read more

Rev. Obofour Runs Away From A Lap Dance From His Wife, Bofowaa In Public...

NPP Bono Chairman, Abronye DC Reportedly Convalesced After He Got Involved In A Ghastly...

Blessed Antwi - 30th November 2020
0
A young man accused of being a ‘wizard’ allegedly “crash landed” on the roof top of a building. The man who...
Read more

Rev. Obofour Runs Away From A Lap Dance From His Wife,...