Otumfour Osei Tutu II is the Chancellor of the KWAME Nkrumah University of Science an Technology (KNUST).

He was named after his grandfather, Ohene Nana Kweku Duah that’s why he is named Nana Barima Kweku Duah. Osei Tutu II has six children.

ALSO READ  It Is A Lie! Angela Was Not Used For “Sakawa” - Family Of The Late Angela Reveals What Killed Her

Otumfour Osei Tutu II is undoubtedly one of the greatest Chief in Ghana and even in the World with how great the Ashanti Empire has been since it was founded.

Even the President of Ghana have much respect to Osei Tutu due to how Powerful and outstanding the Ashanti Empire has been among other ones.

Otumfour Osei Tutu II was once seen in the same image with the greatest Queen Mother of all time, Queen Elizabeth II after he was invited by the Queen Mother to have a meeting.

ALSO READ  It took me 3-years to build my car - JHS boy, Kelvin Tells how he did his Lamborghini

Otumfour Osei Tutu II was a special guest of the Queen who received him in private audience at Buckingham Palace which the two had tea together. 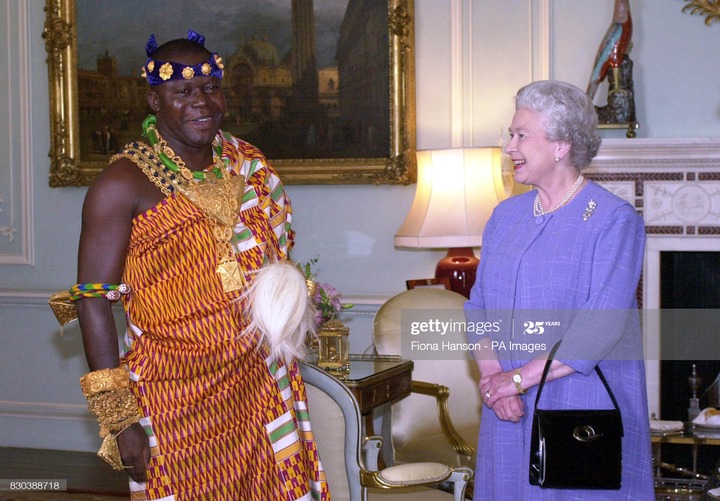 Otumfour Osei Tutu II was then driven through the city of London to the Ghana High commission. It was a great pleasure for Otunfour to experience such an reminiscing moment with the Queen mother.

ALSO READ  Coronavirus: Life will get back to normal after 18months - Bill Gate predicts

After Prophesying The Defeat Of NPP, Prophet Tawiah Makes A U-Turn In Just 15 Days To The Election

Nana Addo At It Again! Caught On Camera Sleeping At His Own Campaign In...

Bla Yaw - 23rd November 2020
0
Nana Akufo-Addo after a week set aside for the nation to mourn the demise of ex-president, Jerry John Rawlings have come to an end,...
Read more

Bla Yaw - 23rd November 2020
0
In a new video sighted on GhPage’s official Twitter page by Ghcelebinfo.online sees a Ghanaian man believed to be in his early...
Read more

We Are Going To Add All Private Schools To The Free SHS Program &...

Bla Yaw - 23rd November 2020
0
December 7th is just around the corner and we have just fourteen (14) days to catch up with it for this year’s general...
Read more

Nana Addo At It Again! Caught On Camera Sleeping At His...

Unlike Yaa Jackson, Maame Serwaa Overwhelm’s Heart With This Video Of...