Ghanaians woke up to hear the sad demise of an alleged party supporter who got electrocuted whiles allegedly fixing a Party’s flag on an Electric Pole as a mean of campaigning for the suppose Party as it’s getting closer to the much anticipated 2020 Elections.

In Ghana, the biggest and outstanding Party rivals for decades now have been the New Patriotic Party (NPP) and the National Democratic Congress (NDC) with how they’ve been the only Parties in government since the early 90s subsequently.

The New Patriotic Party (NPP) and the National Democratic Congress (NDC) as said to be the leading Political Parties in Ghana in terms of loyal supporters who have helped pushed their respective parties to the Pinnacle with their unprecedented love and support going forward.

ALSO READ  God sent me to come and have s3x with men with my divine "Toto" to cure them from all kind of infertility - Females Pastor claims. Watch

But sometimes, supporters intend to do anything for their Party but it’s haywire in most cases to the extent of risking their lives in the name of Politics. Politics is sometimes tagged as a dirty game due to some negative matters that arise on a daily concerning Political decision.

However, the man who got Electrocuted whiles fixing a Party’s flag at Accra-Labone, Kweku Baako Press Street has finally been recognized with his respective Party whom wasn’t even fixing a Party’s Flag but rather the NPP Parliamentary candidate for La Dadekotopon sent his campaign team and together with ECG officials to replace street bulbs and from the process, one person died from an Eletric shock.

ALSO READ  The NDC Pastor, Kwabena Owusu Agyei slammed with 3 charges today as he has been put on remand for Two Weeks

”It happened at laboni kwaku baako press Street, the NPP parliamentary candidate sent his boys together with ECG officials to replace street bulbs and in the process one person died from electric shock but not party flag” Eye witness accounted. 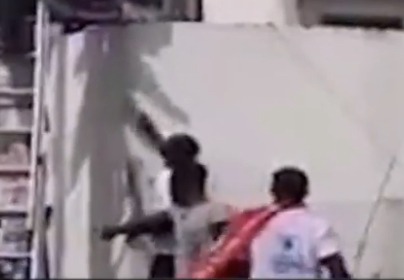 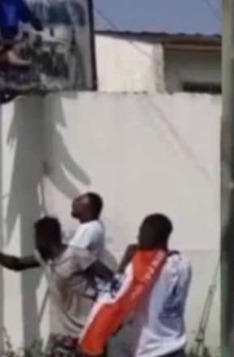 Most of the NPP campaign team who was with him were in NPP flags but misconception sparked online thinking they were fixing a Party flag besides the dead person was in ECG uniform and with the ladder he they were using was an Electric ladder.

It was being speculated whether it was an NPP person or an NDC person but it’s now clear that it was NPP people.

It’s rather an accident for him to lose his life whiles doing such a great job for the community.

So sad for NDC : Kofi Adoma Reacts To The Election Prediction Of University Of Ghana

Video: This Is How Soldiers Have Paraded To The Volta Region Ahead Of The Elections

Ghanaians React To Emotional ‘Rescue Me’ Campaign Advertising Of The NDC

Bla Yaw - 27th November 2020
0
Social media has been buzzing, since a billboard with the headline inscription “Rescue me” surfaced online. The billboard is...
Read more

Rev Owusu Bempah Expose Himself For Lying On ‘Innocent’ Mahama Over The Death Of...

Bla Yaw - 27th November 2020
0
Popular Ghanaian prophet, Rev. Dr. Isaac Owusu Bempah has been contradicting himself and it’s getting out of hands. It appears...
Read more

Bla Yaw - 27th November 2020
0
When it is Elections year a lot of prophecies from our so called men of God will be hitting us from all...
Read more

“If He Losses The Elections I Will Not Touch My Bible Again” – Old...

Bla Yaw - 27th November 2020
0
As the time reduces towards the 2020 general elections, a lot are happening. All Political parties involved are preparing for it. They...
Read more

Ghanaians React To Emotional ‘Rescue Me’ Campaign Advertising Of The NDC

Rev Owusu Bempah Expose Himself For Lying On ‘Innocent’ Mahama Over...