The Founder and Leader for the Rabbi Church of Rabbi popular known for his controversial and doom Prophecies, Prophet Kwabena Tawiah has been one of the clouted Prophets in recent times after he sent a strong warning to the New Patriotic Party (NPP) ahead of the 2020 election.

He insinuated that The flag bearer of the Party and the member must come and see him before the 2020 Election for him to cancel some devilish plans that has been set up against the Party which can make them lose the Election.

Prophet Kwabena Tawiah attracted much attention from the masses which raised concern over why a man of God must insist of the demise of the President if he fails to come and see him or give him what he wants.

Some men of God such as Rev Owusu Bempah and Kumchacha descended heavily on Kwabena Tawiah for his doom Prophecy which they claimed he is fake man of God.

Over all his controversies, Prophet Kwabena Tawiah stated that, he helped the NPP to come into Power after making some spiritual direction to the Party but non of the members of the Party acknowledged his good works and when he calls them no one picks up which raised for his anger.

ALSO READ  Find out the reason why Jackie Appiah visited Popcaan in his new home.

Meanwhile, on a video sighted on Oman TV, Prophet Kwabena Tawiah was sighted together with his Junior Pastors whiles performing a spiritual direction on behalf of all Ghanaians ahead of the 2020 Election. 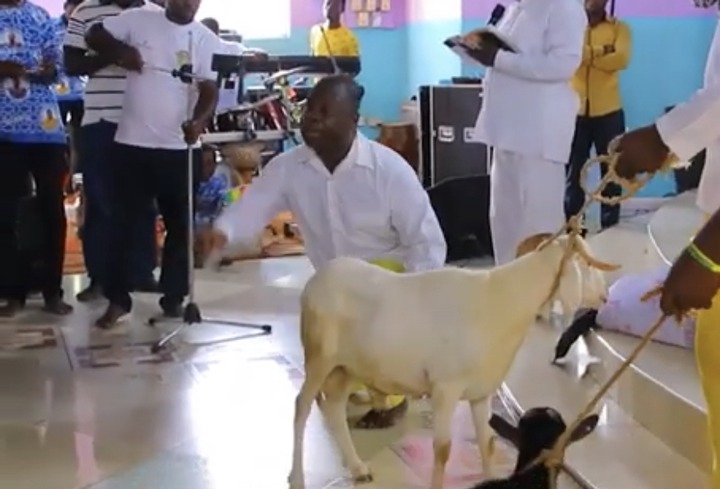 He insisted that the NPP has now done the right thing that’s why he has been propelled to perform the spiritual direction to wipe out any evil plans plotted.

He performed this direction purposely on behalf of mother Ghana to eradicate any spiritual plot against the nation as whole in the upcoming elections to seek on a Peaceful Election from God.

He tight the flag of Ghana and other weird stuff on the body of sheep and Goat. According to him he will burn this animals as burnt sacrifice to the almighty God.