Sad And Sorrowful Scenes From AICC After Papa J Was Laid To Rest To Filing Past.

The late Flight Lieutenant Jerry John Rawlings will finally be going home on 27th of January 2021 as his body has finally been laid to rest for filing past at the Accra International Conference Centre.

His body will later be conveyed to the Independence Square for the final burial rite on Wednesday.

Jerry John Rawlings Demise came as one of the greatest shock in the history of Ghana and Africa as a whole and still the pain still lingers on the mind of many with how influential and energetic he was as a Flight Lieutenant and the first President of Ghana under the 4th republic. 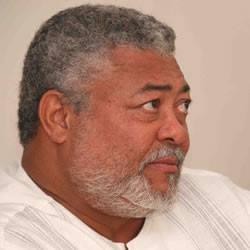 Jerry John Rawlings is deemed as one of the greatest Africa leaders and will undoubtedly be next to Dr Osagyefo Kwame Nkrumah after being the only President for ruling for over 15 years (Before and after the 4th republic.

Family, friends, sympathizers, government officials and many others have already showed up at the Accra International Conference Centre to pay their respect to the Flight Lieutenant

ALSO READ  Your threats and insults won't stop me, this is just the beginning - Agyin Asare charges on Politicians

It was full of sorrowful moment after some individuals couldn’t controlled their tear even with his own daughter, Yaa Asantewaa Rawlings.

Jerry John Rawlings legacy shall always remain in our hearts. May his soul rest in perfect peace

Sad Moment: The Moment Becca Mother’s Body Was Conveyed By Horse Men To Her Funeral Ground

Bla Yaw - 25th February 2021
0
Imagine telling everyone you own the game only to be told you are a disgrace to the very game you claim you...
Read more

Medikal Celebrates His Boss, Criss Waddle On His Birthday With A 10-Year-Old Photo

Bla Yaw - 25th February 2021
0
AMG Business’ most prized signee, Medikal has penned down an appreciation post to his boss, Criss Waddle who is a year older...
Read more

Bla Yaw - 25th February 2021
0
Ghanaian police officer, Ama Serwaa Dufie, ever since she got the attention of many Ghanaians on social media have been wowing social...
Read more

“He asked for it” – Woman says after being caught sleeping with a 13-year-old...

Fan tells Shatta Wale to work on his patois and stop...

Medikal Celebrates His Boss, Criss Waddle On His Birthday With A...