The somewhere in Africa fame since the confirmation of her wife’s death has been very up-dative over the funeral arrangements of his spouse.

Eddie Nartey although has been pained by the sudden demise of his beloved wife, he has tried his possible best to hide his emotions as his colleague actors have all throw their support and inspiration to the bereaved

Eddie Nartey Married Vida in about 3-years now. They married way back in 2018 which saw numerous Ghallywood stars in the simple but yet glamorous Traditional wedding. It’s very sad for the lost of Vida after just 3-years of her getting married.

However, today being it 13th of March 2021, Eddie Nartey’s Wife, Vida was finally buried after 2-months of her demise. The burial ceremony saw numerous stars such as; Majid Michel, Jackie Appiah, Gloria Sarfo, Salma Mumin, Beverly Afaglo and many others.

They all gathered in their numbers to show love and support to Eddie Nartey in this hard times of his life. It’s not easy to lose your partner in marriage to death.

The Late Vida Ohenewaa funeral was really a befitting burial ceremony as the popular Dancing Pall bearers was the hired Pall bearers who eased a bit of sadness. They really displayed their dancing skills with the brown coffin. They were dancing with Joe Mettle’s ‘Hosanna’ single. 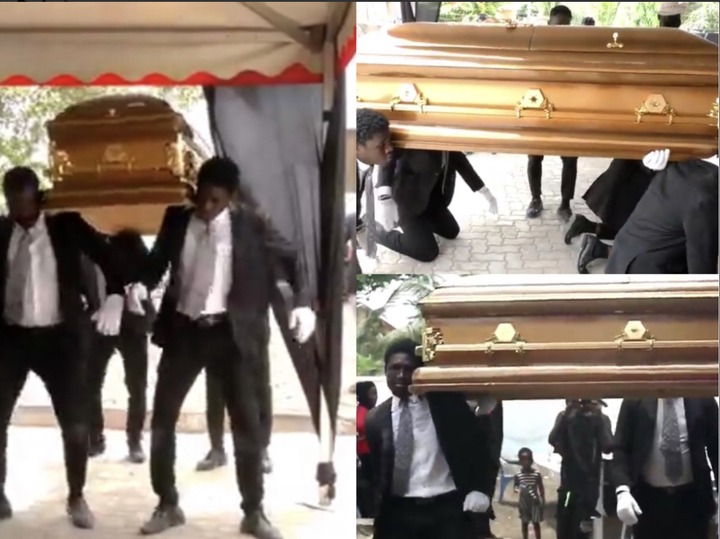 They really danced well and was well organized and uniformed to pay their last respect to Vida Ohenewaa.

Check out some scenes from the display by the Pall Bearers;